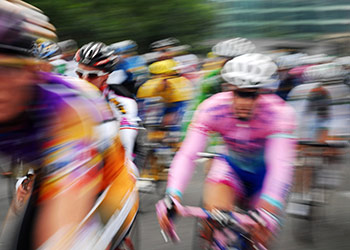 Starting at the iconic Tower Bridge and working its way across to the wondrous Albert Bridge, the routes covered over a dozen bridges throughout London. Participants had three routes to choose from:

- The original Standard Route is over 30 miles. It begins in Southwark Park and crosses the city to Hurst Park. - For an extra challenge, the Advanced Route covers 50 miles. It matches the Standard, but detours for more sites. This is the route for confident and experienced cyclists. This route was only open to those aged  17 and older. - The Family Route is a circular path that covers eight miles between pit stop 3 at Ham Common and Hurst Park, making it perfect for riders of all ages and abilities. Cyclists under 16 were allowed to compete, but had to be accompanied by an adult.

It wasn’t just a great charitable event. The Thames Bridges Bike Ride is an exceptional way to view London’s most beautiful sites, centered on the city’s classic bridges.

They include the song inspiring London Bridge, the first structure that crossed the Thames; Westminster Bridge, designed by Charles Barry with a gothic, seven arch design; Albert Bridge (see image), the only bridge in London with (long closed) toll booths; Kew Bridge, near Botanical Gardens Richmond Park, part of the bike ride and home of 650 free roaming deer; Chelsea Bridge and its community of houseboats lining the river; and Southwark Bridge, near St. Paul’s Cathedral and Southwark Cathedral, an area made famous in many works of Charles Dickens.

Stroke is one of the largest causes of death in London. Studies have shown strokes take three times more lives than breast cancer in women and prostate cancer in men.  Survivors and their loved ones can have their lives irreparably damaged.

The Stroke Association supports stroke survivors with a wide variety of programs. They promote education to prevent strokes. They support recovery with their life After Stroke services. They encourage funding and research for finding better and new ways to treat stroke victims.

Everyone that participated in the Thames Bridges Bike Ride was sure to have had a great day of adventure, as well as campaigning for the Stroke Association and the fantastic work that it does.

The Thame Bridges Bike Ride event passes all three of our London currency exchange bureaus at London Bridge and Canary Wharf (Canada Place and Cabot Place). If you're planning on travelling to embark on an cycling adventure, stop in and see us for the best travel money exchange rates around.

Share this
Next article: Canary Wharf Jog
Click & Collect Order online collect same day.
Pay on collection. HOME DELIVERY Free delivery across the UK
for orders of £750 or more. SELL YOUR CURRENCY Its a fact - we will pay you up to
8% more than the Post Office. PREPAID CURRENCY CARD The alternative to carrying cash.
Top-up online from anywhere.