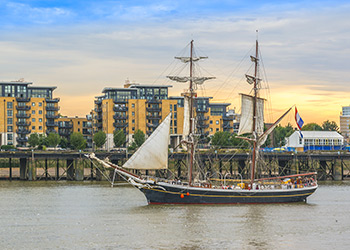 For those people who dream of what it would have been like to sail on the high seas in a tall ship, the time has arrived for them to find out. The London Tall Ships Regatta, scheduled from September 5-9, will play host to more than 50 spectacular tall ships from various points around the world. The festival, with its five days of action-packed activities for people of all ages, promises to be one of the most anticipated events of 2014.

Festival Events
With people of all ages attending the festival, a wide array of events are scheduled to take place. Some of the most anticipated ones include:
- Peixos
- Crew Parade
- Twilight Shanties
- Woolwich Bandstand Music Extravaganza

Peixos, presented by the Catalan street theater group Sarruga, will offer an underwater spectacular that features lanterns and cycle-powered machines, guaranteed to stun and amaze all who attend. For music lovers, the Twilight Shanties will feature local group Swinging the Lead playing sailors' songs from the olden days, promising a delightful evening of singing and stories.

Ships and Their History
There's no sight more striking and awe-inspiring than that of a tall ship, and with so many in attendance there will be some to please everyone. All of the ships have a rich history, and with the London Tall Ships Regatta marking the largest gathering to visit the city in 25 years, it's a chance to see and learn about the many ships that once upon a time ruled the waters of the world. The ships can be seen at several locations including:
- Greenwich
- Royal Arsenal Woolwich
- Wood Wharf
- Enderby Wharf
- Victoria Deep Water Dock

At all locations, people may board ships free of charge to learn more about them. For those interested in taking a cruise, those boats board at Woolwich. Among the more interesting ships at the festival are:
- Amelie Rose
- Atyla
- Duet
- Eye of the Wind

Duet, launched in 1912 and once owned by famous explorer Augustine Courtauld, once went on an around-the-world voyage in 2012 to celebrate its 100th birthday. Eye of the Wind, considered one of the best built ships in the festival, has been around since 1911. Among its claims to fame are starring in several movies with such stars as Tommy Lee Jones and Jeff Bridges and also serving as the flagship for Prince Charles during Operation Drake, a round-the-world voyage completed in ten stages and having crew members from many countries.

Share this
Next article: 7 Spectacular Safari Holidays
Click & Collect Order online collect same day.
Pay on collection. HOME DELIVERY Free delivery across the UK
for orders of £750 or more. SELL YOUR CURRENCY Its a fact - we will pay you up to
8% more than the Post Office. PREPAID CURRENCY CARD The alternative to carrying cash.
Top-up online from anywhere.